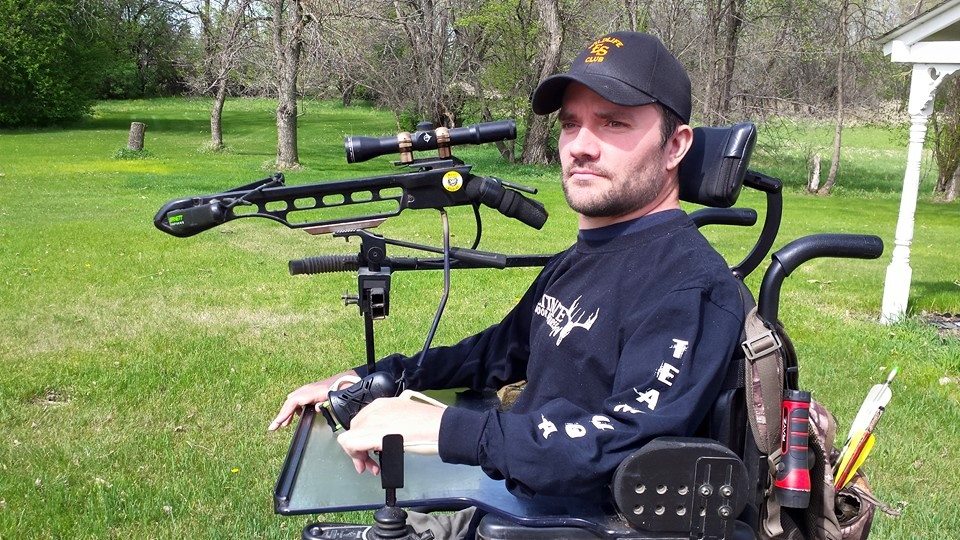 I was born and raised on a farm in North Dakota. When I was 15 years old I was in a hunting accident that left me paralyzed. I am a C4-5 quadriplegic. I graduated from North Dakota State University in 2002. Started hunting again when I was 19. I have a crossbow mount and a rifle/shotgun mount that can be attached to my electric wheelchair. I also fish with an electric reel that can be mounted to my chair. I am president of my local wildlife club, active in summer baseball program and write as much as possible about my activities. Hoping some of my ideas can help others get out and enjoy the outdoors.

“There are always hunting accidents that involve shooting of another in a hunting party. I know this all too well, I am one of the statistics.”

Sad to say, in every hunting season, in every state, there are always hunting accidents that involve shooting of another in a hunting party. I know this all too well, I am one of the statistics. On December 28, 1994, my life would change forever after my own hunting accident.

During Christmas break of that year, we had wrestling practice once a day, usually in the mornings and after that a couple buddies and I would go trudging through the snow looking for deer with our bows.  Northeast of my hometown in the “Hartford Valley” there was always a big group of deer that wintered there.  We would spend hours pushing deer back and forth but no one ever got a real good shot at any deer.

On this day we decided to push the whole mile of river bottom from one section line to the next.  We dropped off one friend at the north end of the valley and me and the other friend were going to post at the other end.  The friend who was walking towards us did not have a bow but he brought along his 22 caliber rifle and was hoping to shoot one of the many squirrels or rabbits along the trail. As we were posting at the south end we could see our friend coming towards us but there were no deer.  I started to get up when I realized that my friend was aiming right at me.

The next thing I knew I was flat on my back and I could hear some yelling.  I remember lying there not been able to feel or move anything.  I had a warm and tingly feeling all over my body.  It was the weirdest feeling in the world.  The next thing I knew my friends were looking down at my asking me if I was hurt and then they realized that the bullet went right through my neck.  They asked me if I was in any pain and to their shock, I said no, but now I know why.  I probably wouldn’t be here telling you this story if one of my friends did not step up and take control of the situation. He packed my neck with some of the snow, reached in my pants pocket and grabbed the keys and ran back to the pickup.  I later learned that if he would not have done that I probably would’ve bled to death.

I was conscious the whole time this was going on.  I later learned that when my friend was running back to the pickup he had to cross the river which was flowing but was not deep.  When he was crossing the river he was shaking so bad that he dropped the keys into the water, thankfully he found them right away. I remember hearing the pickup start up and him driving about a mile and a half to the nearest farmstead where he called 911.  I remember the sound of the ambulance coming and I swear I could hear it coming from town, 6 miles away. Once the ambulance got there I remember getting into the vehicle and that is when I passed out.

Since that accident, I have gotten back into hunting. Actually, hunting is what got me back into enjoying life again. I have hunted different game in a couple of states and have seen my share of close calls when it comes to hunting accidents. Accidents are just a part of life in every aspect you choose to participate in but I believe this product could be a game changer. 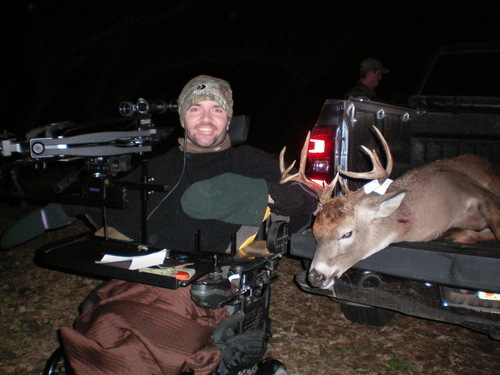 “I know one thing, if I could go back in time and SafeShoot was available, I would’ve taken my chances on it working.”

I don’t know if SafeShoot would’ve changed anything on December 28, 1994. But I know one thing, if I could go back in time and SafeShoot was available, I would’ve taken my chances on it working.

Hunters emphasize safety during the season but injuries from a friendly fire can still occur with tragic results. SafeShoot is designed for that extra protection during the hunt that does not have to change your hunting behavior. Even the most safety conscious hunter in the field can still have an accident. SafeShoot provides a high level of protection for any hunting party wanting to achieve safety.

SafeShoot is an automatic system that provides warnings to hunters if they accidentally endanger someone else in their hunting party. This device attaches to any shotgun, rifle or pistol and provides a last-second alert before the trigger is pulled.

Each participant in a hunting party would have their weapon equipped with the device. When taking aim the system will immediately and automatically alert shooters when there is a high risk of a friendly fire accident. Potentially saving someone’s life.